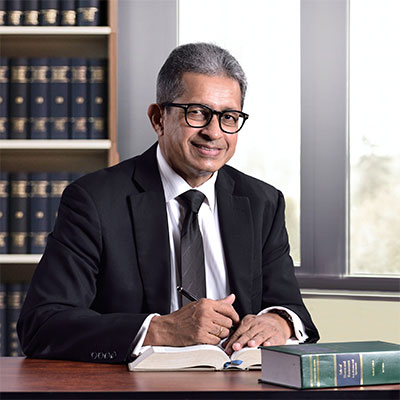 MR. NIHAL JAYAWARDENE LL.M (LOND.)
President's Counsel
In-house Counsel
nihal@capitalcitylaw.lk
nihaljayawardene@gmail.com
Mob : +94 (77) 3070682
Mr. Nihal Jayawardene was admitted as an Attorney- at-Law of the Supreme Court of Sri Lanka in 1983 and was admitted as a Solicitor of the Supreme Court of England and Wales in 1991. He obtained a Master’s Degree in Public International Law (LL.M) from University College London in 1990-91. He was appointed a President’s Counsel in 2012. He is presently the Chairman of the Company Law Advisory Commission of Sri Lanka and a Member of the Commission appointed by His Excellency the President for the purpose of simplification of laws and regulations. His more recent contributions include assisting to develop a legal framework for the Special Economic Zone, through the proposed Colombo Port City Commission Act, in line with the vision of the Government.

Mr. Jayawardene commenced his career as a State Counsel at the Attorney General’s Department of Sri Lanka in 1984. He furthered his knowledge having attended international training at The Hague Academy of International Law. He was the Supervising Officer in the areas of Company Law, Investment Law and Aviation Law and thereafter became the head of the Corporation Division of the AG’s Department which handled legal work of over 200 Government Entities. He commanded expertise in negotiating and finalising commercial contracts. He also served as a member of legal advisory teams that assisted the implementation and operation of large projects namely, Restructuring of Sri Lanka Ports Authority to create the new Container Terminal operating company, the South Asia Gateway Terminals (SAGT) Limited, Second restructuring exercise of the Ports Authority to create the parallel container terminal operating company Jaya Container Terminals Limited and in the restructuring of public enterprises including National Carrier Air Lanka, Sri Lanka Telecom Limited and several other plantation companies and insurance institutions.

Mr. Jayawardene served as a Legal Consultant to the Public Enterprises Reform Commission (PERC) the privatisation arm of the Government and was actively involved in almost all privatisations carried out by the Government at the time, while serving as the team Leader of Legal Consultants who advised on privatisation from 2003 to 2005. He advised the Ministry of Finance and Planning on Finance, Taxation, Customs, and Foreign Investments etc. He also served as a Legal Consultant to the Ministry of Urban Development. He commands extensive experience in hospitality sector related legal work including drafting of management/ stakeholder agreements, construction agreements, refurbishment agreements, loyalty agreements, employee and human resource related agreements and Litigation (Colombo Hilton, Grand Hyatt etc).

Mr. Jayawardene made a significant contribution towards recent developments in Company Law in Sri Lanka. He was initially involved in the reform process as the Secretary of the Sub-Committee appointed by the Company Law Advisory Commission to study and report company law related reform needs in Sri Lanka. He thereafter functioned as the Research Coordinator along with the World Bank Consultant, with whose assistance the Advisory Commission prepared the initial draft for the consideration of the Government. He was appointed a member of the Company Law Advisory Commission of Sri Lanka in 1998 in which capacity he served till the new Companies Act No.7 of 2007, was enacted. Other hands on drafting contributions made by Mr. Jayawardena include, Civil Aviation Authority of Sri Lanka Act, Civil Aviation Act, Banking Act, Securities and Exchange Commission Act, Tourism Development Law and Construction Industry Law. He has extensive experience in negotiating international bilateral air-services agreements.

Mr. Jayawardene served as a Tutor of Sri Lanka Law College (1984 - 1988) and was thereafter appointed as a Lecturer and an Examiner in Commercial Law (1994) in which capacity he serves to date. He is also a member of the Academic Staff of the Institute of Advanced Legal Studies of the Council of Legal Education since 2007. He served as the Consultant Editor for Sri Lanka of the International Corporate Law Bulletin published by the Institute of Advanced Legal Studies, of the University of London, (1998 - 2001). His publications include - Company Law Reforms in Sri Lanka (1998), Company Law Reforms - A Long Felt Need (1998), Infrastructure Development - A BOO-BOT Approach (1997) and A Comparative Study of the Legislative Functions of IMO and ICAO (1991- LL.M Thesis).